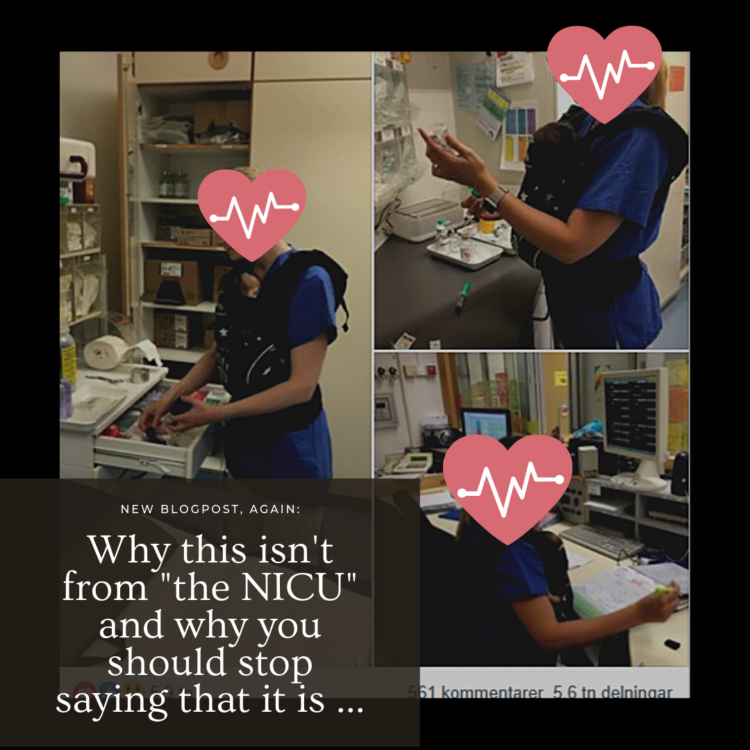 Update (1 Feb 2020): I also managed to dig up that the photos actually are from 2016 and that the original posting did state that the pictures was from a pediatric surgery unit, or ”kinderchirurgie”.

During the last days this picture below has been shared a lot in social media with the caption: ”These amazing nurses are in NICU (Neonatal Intensive Care Unit) in Germany, giving extra love and care to sick and prem babies when their families can’t always be there.”

The pictures are originally posted by a site that offers exercising classes with your child in a carrier, and the pictures have received thousands of shares, likes and comments. And people around the world have saluted the compassion, connection and care they see provided by the nurses in the pictures, comments have been made that this is something that “all countries should be doing this”, “the worlds cosiest job!” and “THAT is proper healthcare!”.

I am a NICU (and Neonatal) nurse and I don’t fully agree with this, here I will try to describe why and why it’s important that people outside the NICU-bubble understand what, how and why the NICU works the way it does.

First and foremost I think it’s important to point out that the pictures are not from a NICU, after some research (and very helpful NICU-colleagues) the pictures are from a pediatric surgical unit and that IS a difference. The baby (or babies) does look young and could absolutely be a neonate (and within the neonatal period of life, 28 days post-partum) but it is not being cared for in the NICU. How can I be so very certain of this? Well, because the baby seem to have one intravenous infusion going in and is otherwise stable enough to both sit in a carrier, and also stable enough that the parents are confident enough that the baby is doing well enough that they are calm enough to leave the baby’s side.

Here’s a quotation from Wikipedia’s description of  an ICU (Intensive Care Unit): “Intensive care units cater to patients with severe or life-threatening illnesses and injuries, which require constant care, close supervision from life support equipment and medication in order to ensure normal bodily functions. They are staffed by highly trained physicians and nurses who specialize in caring for critically ill patients. ICUs are also distinguished from general hospital wards by a higher staff-to-patient ratio and to access to advanced medical resources and equipment that is not routinely available elsewhere.”

The N in NICU, simply stands for “Neonatal” which means that the patients are within the neonatal period of life, this means that at a NICU we deal with severe and potentially life-threatening conditions with the extra edge of having a patient who is challenged by being newly adapted to uphold and sustain it’s own bodily functions such as breathing (or, as in the case of being born pre-term, not even supposed to do so yet and therefor needs the support to sustain and cope with it). NICU care rather looks something like this, which is quite far away from what’s displayed in the pictures above.

Families to patients who need this care spends a huge part of their day battling the uncertainty of whether their baby actually will survive. I, for one but I strongly suspect that most of my colleagues would agree, do my very best to support and encourage the families of these patients to spend as much time as possible with their babies because sometimes they might not get tomorrow or the next hour together.

Wrongfully portraying the NICU as something it isn’t is (to me) disrespectful. Disrespectful to those who work in a NICU, because I do promise we all struggle from time to time and cry our hearts out from time to time over the sometimes just pure tragedies we bear witness to. To the progress and development neonatal intensive care has done, in both medical and technical advancements as well as family centered care and participation over the years (we’re pretty far away from where we were just some 20 years ago and tragically still are in some parts of the world). But most of all it’s disrespectful to the families who have been, in future might or currently are going through the NICU-battle, which is probably one of the worst experiences they will ever have to endure.

As a little footnote to those who might consider me as a bit of a cold hearted person who doesn’t think staff should keep the babies close or carry them in carriers, you’re wrong… I have and will continue to do it when necessary, necessity in case of my patient being in desperate need of it (for comfort or medical reasons) but always and only if the family isn’t able to do it themselves for their baby (or if there is no family). I solemnly swear to save those precious moment of possibility to hold your neonatal intensive care needing baby close for YOU and/or the rest baby’s family!

As a second footnote, apparently you need those sometimes, i do not in anyway put any blame on the nurses pictured for this misunderstanding, i’m perfectly convinced that they followed their units rules and protocols and also the families wishes. And i do salute them for their very compassionate care!