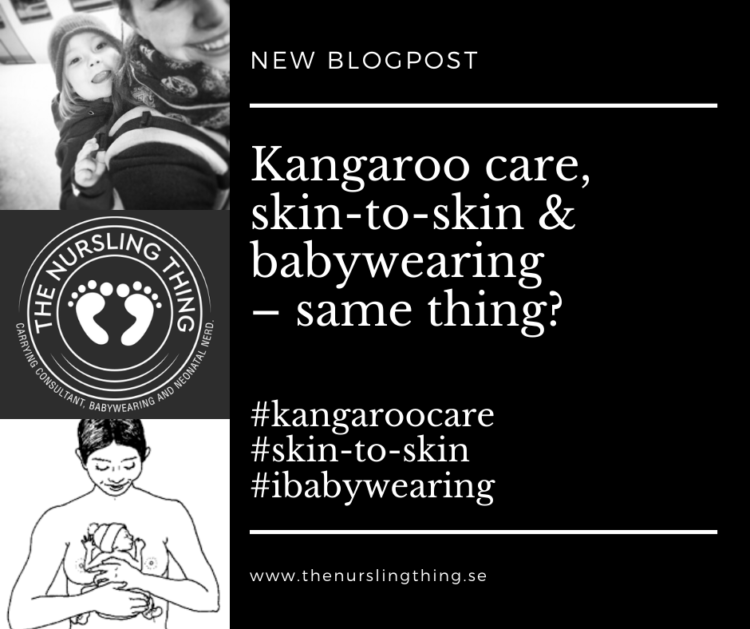 To a quite large extent, and because of my job, I’m probably a bit more meticulous than most on some topics. One of them are the differences between kangaroo care, skin-to-skin / “skinclose care” and babywearing.

It may seem a bit ridiculous, but if you read research and want to know what the results of the study have shown, you need to have your concepts in order, or at least knowledge about their differences. So below I’ve tried to show the differences and similarities that actually exist between the three, even further down the post I’m going into more about why and when this can play a role.

If you look at the table above you can see that there are some differences (skin exposure, breastfeeding, for who), but it also differs in why. The differences become extremely important if you want to link it to research and scientific evidence. These differences mean that we cannot really say that we have scientific evidence for babywearing if the study we refer to is done on kangaroo care, because the effects may depend on or have their origin from skin exposure, a possible breastfeeding, child’s state of health or age, etc.

In Sweden, kangaroo care and “skin-close-care” are common practices within the hospitals and with the infants/children who have a need of medical care. Everything that begins with kangaroo- tends to be for premature and/or low-birthweight infants while skin-to-skin tends to be used for newborn babies on maternity wards/delivery rooms. “Skin-close-care” (or Skin-to-skin-care) can be said to be everything in between. And for someone who has just argued hard for the relevance to distinguish between concepts, it may be a bit provocative when I say that the concepts partly overlap and partly differ depending on who or where they are used. There is also a discourse that advocates for new concepts to more easily separate the broader care philosophy (such as Kangaroo Mother Care, KMC) from the actual activity of having the child in kangaroo position in direct skin contact (commonly referred to as Kangaroo Care). In this discourse a problem arises in deciding who is appropriate to decide which concepts should be used and how they should be formulated.

But if the concepts overlap, used a bit differently and sometimes means the same, why does it matter?! Well, it plays a role when you study research and want to argue that there is scientific evidence for something, because then you have to be aware of what has been studied in order to determine what has been proven. With that said, every person is of course free to choose to consider the benefits gained from kangaroo care for sick and/or premature children correlate or resemble what you experience with your older child babywearing it home playground in full outerwear. Experiences like the one described above (big children, outerwear and home from the park) are often amazingly rewarding and something I absolutely think you should talk about, spread and share, but it’s not scientific evidence, and it’s not kangaroo care.