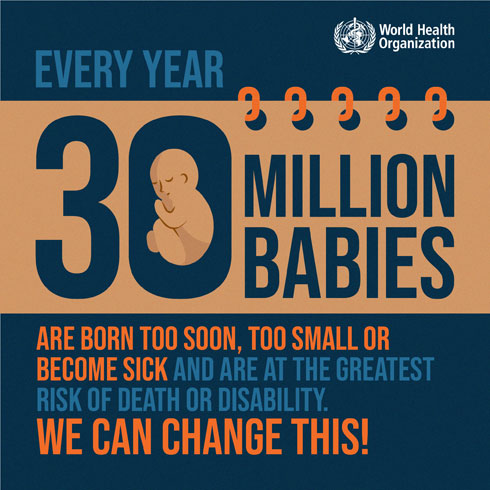 Dwelling a bit on the painful parts of inequality and how our circumstances can influence life, this time a bit more on the neonatal side of things.

At the NICU where I work we’re able to give patients a very complex and advanced neonatal intensive care, this isn’t the case all parts of the world. However, in the babywearing community the focus many times seems to be put on what units like mine should do better (and we do have a lot of things that we could and should and will improve on) but in comparison to the circumstances in other parts of the world it can sometimes be quite frustrating to hear. Following I’ll present some truly daunting numbers on neonatal mortality from the WHO.

In 2017, 47% of all under-5 child deaths were among newborn infants, this is an increase from 40 % in 1990. This is an estimated 2.5 million babies passing away during the first month of life, 1 million on the very first day and almost 1 million within the next 6 days. This means that an estimated 7000 newborns die every day.

Preterm birth complications are the leading cause of death among children under 5 years of age. The rate of preterm birth ranges from 5% to 18% and every year, an estimated 15 million babies are born preterm, and this number is also rising. Numbers will vary depending on where in the world one looks. In low-income countries 90% of babies born at or before 28 weeks dies (at or below 32 weeks this number rise to 50%, on an average 12% of all births are preterm in low-income countries), in comparison with 10% in high-income countries (average on 9% pre-term). Over 60% of all preterm-birth occurs in Africa and South Asia. It’s estimated that 3/4 of deaths due to pre-term labour can be prevented with current, feasible and cost-effective interventions.

These “current, feasible and cost-effective interventions” are the things we in the western world may take for granted such as incubators or other kinds of aids to help thermal regulation, breathing support, breastfeeding support, kangaroo mother care, antibiotics for treating infections, adequate care at birth and antenatal steroids. In other words not the most complex and advanced intensive care, on the contrary middle-income countries have seen an increase of disability in children due to suboptimal use of technology, something that is crucial to keep in mind when “trying to help” from a country such as Sweden for example.

A colleague told me about how their team had experienced that achieving kangaroo care with mothers in South Africa turned out to be a bit of a challenge, as the mothers wanted their babies to get the same care as in the western world, being placed in incubators and not on their mothers chest. And comparing 90% survival rate with 10% I too would definitively had gone for the care that promised better chances for my baby’s survival. This ties in with the current discussions in the babywearing community about inclusivity for all, since the western world could (in cases like this one) be viewed as replacing habits and practices (carrying the infants close) in a way where we replace traditional, cultural and historical practices with new ones from the West (placing the infants in incubators and such aids), leading to severe negative consequences and implications.

This subject, the number and the differences has always hit me quite hard, as it should, and at times I really struggle with a feeling of not knowing what to do or how to facilitate change. But I guess that the solution is to listen, learn and to lend myself out by asking “how can I help” rather than pushing solutions, technology or practices that I’m used to or think are useful. Because it’s not about me, my agenda, my knowledge or my reputation, it’s about 7000 infants a day, not surviving until the next day.